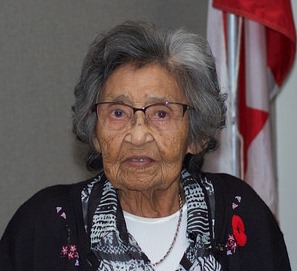 Nellie Carlson is a respected elder, whose inspiration for the movement of Aboriginal women’s rights came from her own experience. Mrs. Carlson, a Cree woman, lost her treaty rights when she married Elmer Carlson, who was Métis.

Being born a Cree woman, Mrs. Carlson was eligible for certain rights under Treaty Six. This treaty, signed in 1876 by her Cree ancestors and representatives of the Crown, promised one square mile of land for each family of five in a permanent reserve, hunting and fishing rights, education benefits, health benefits and annual treaty payments.

Beginning in 1951, only band members registered under the Indian Act had the legal right to live on-reserve, share in band resources, own or inherit property, vote for band council and chief and be buried on the reserve.

Within three weeks of her marriage to Mr. Carlson, she received a letter informing her she had lost her Aboriginal status. This also meant her children would not have a status either. Under Section 12(1) (b) of Treaty Six, any First Nations woman who married a non-status Indian, a Métis or a non-aboriginal man would lose her Indian status regardless of her ancestry. This often forced First Nations women to be exiled from their home community.

Mrs. Carlson’s mother urged her to continue to fight for the right to be recognized as an Aboriginal woman, as it not only impacted her, but many other women as well. During this time Mrs. Carlson’s phones were tapped, she was followed and threatened for standing up for Aboriginal women’s rights.

The struggle to reclaim their rights for herself and her children, and the network of First Nations women who were involved in the Indian Rights for Indian Women movement, took decades and met with resistance not only from the government, but from some First Nations men, who referred to them as “squaw libbers,” and even from some women who had married status Indians, thereby retaining their rights, or, in some cases, gaining rights they were not previously entitled to.

Mrs. Carlson notes with irony that although it took only 18 days to receive notice that her identity status had been changed, it took her over 18 years for the Indian Act to be amended to support equality of all Aboriginal women.